So yesterday I went for a Mountain Bike ride near where I live.  It is a nice network of trails that involves a good amount of climbing with equal amounts of descent so that even if you work like a dog going up hill you still get that reward of going downhill to balance it out.  On this particular day I didn’t have a ton of time to go ride, maybe about an hour, and I am not in great physical shape endurance wise so it takes me longer then I would want to climb up, so I knew I would have to do a short ride.  After climbing the roughly 1.5 miles of single track up I rode a little ways on a dirt road and then took a different roughly 1.5 miles of different single track down.  As I came to the second single track I noticed the sign on the trail.  It was a typical trail sign with the typical warning and safety labels on it.  It let me know that hikers and equestrians could be on this trail as well as other mt. bikers and that I could adopt this trail, and to pick up after my dog, that sort of thing.  It was the second to last picture that really got to me (I circled it in black so that you could see it) it is a picture that is being seen more and more on all kinds of trails.  It is the Dirt Bike with the red crossed out circle around it, you know what I mean. 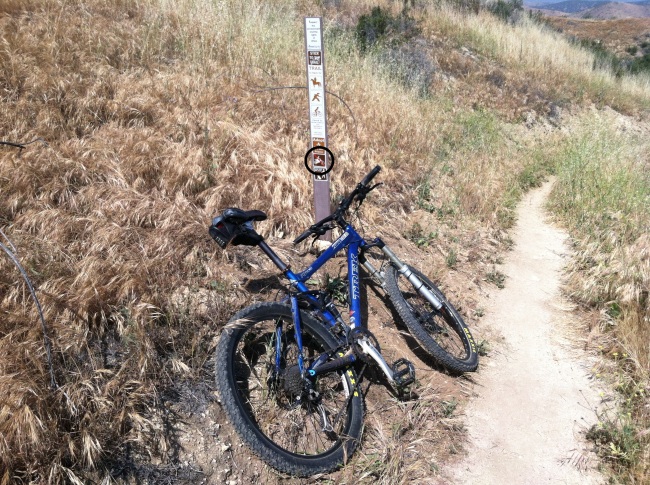 This I have seen around a lot, and frankly for the most part, it is not a problem, I honestly don’t want to be ridding my Mt. Bike or have my wife jogging on a trail that is in the middle of town like this one, and have to worry about being ran over or ran into by a guy on a dirt bike on twisty narrow single track like I like to ride on my Mt. bike.  And honestly I think that it is ok for trails to be designated for only specific activities, as long as it doesn’t go overboard and as long as it stays that way.  What I mean by that is if it is a Dirt bike trail, don’t let a few overzealous equestrians or environmentalist shut it down just because they don’t like it.  Rather, let the trails stay open as they have been for a long time.

Secondly I feel that we should have designated off road trails for dirt bikes that are for dirt bikes.  Hikers, mt. bikers, equestrians, and the like should stay off, that way we all get what we want.

What I find to be really different about these particular trails is the fact that I personally know the guys from back in the late 70’s and 80’s who made these trails on their dirt bikes.  Like I said before I don’t mind that these trails don’t allow dirt bikes, even though they made them, as the town I live in has a huge mt. biking culture and we need a safe, local place to ride.  What bothers me is the closing of Dirt bike riding areas that have been dirt bike riding areas and nothing but dirt bike riding areas since their creation.  If hikers, and joggers, and mt. bikers, and equestrians aren’t using the area because it is dirt bike only, then leave it alone, don’t shut it down for them.  Dirt bike and off road motor sports participants need a place to ride, and when these places get shut down it only encourages more and more people to start riding in areas that they shouldn’t, this then makes non off road enthusiasts angry and in turn shuts down even more riding areas, causing people to ride where they shouldn’t and it just becomes a vicious circle.  Some of you remember a while back when the State of California tried to all but remove riding areas completely and if it wasn’t for a band of very determined off road enthusiasts they would have succeeded, we don’t need that to happen again.

Now my four yeas of living on the big island of hawaii with very limited riding areas has taught me a few things, the most important was to stick to the trails.  We were in constant danger of trails be shut down because someone decided he didn’t like the trail that was there and wanted to go ride where he wanted to ride.  I firmly believe that we need more trails for dirt bikes and quads to ride, and the more designated trails we have the less there is going to be people destroying non-riding areas, and everybody is happy.

I guess in the end what I am trying to say is we need to take care of what we got, petition correctly not angrily for more riding areas, and be responsible with the land that isn’t ours.  If not we will see more and more signs like the one above popping up everywhere and eventually the only place we will have to ride is our imagination.

This entry was posted on April 15, 2013 by imsoffroad. It was filed under Uncategorized and was tagged with bikes, biking, closed, closing, dirt, gas, IMS, Mountain, off, Off road, riding, road, signs, tanks.